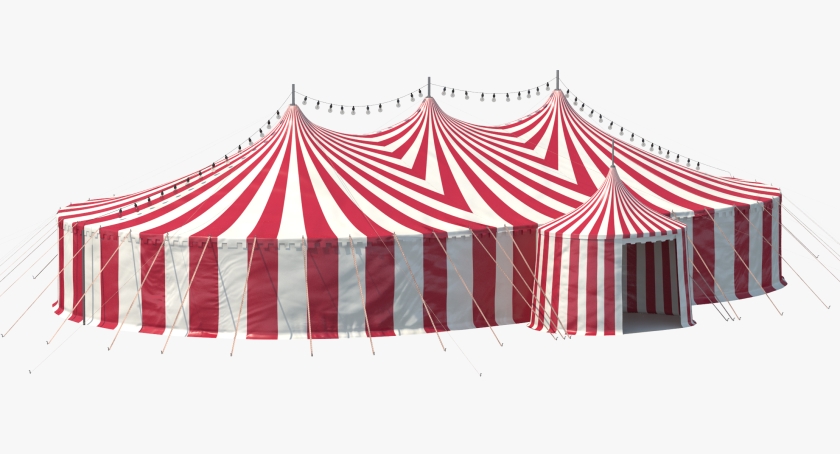 We stood in line for what felt like hours. It wasn’t often that the circus came to our small town, and it seemed like every family in that small town had chosen this particular day to attend. Unfortunately, my family was no exception. I was 12 years old at the time and considered myself far too old and mature to be enjoying something as childish as a circus. My fear of being seen in that line (let alone with my parents and siblings) was an embarrassment that manifested itself both as a surely attitude, and an impatience to get inside.

As we got within a few families of the tent entrance, I could see the ticket-master and a few circus staff members acting as greeters. I had been to circuses before, so this was nothing new. What was different about this greeting party was that one of its members was a small boy, perhaps only two or three years younger than I was.

He was dressed in fancy bright clothes, had a wisp of hair that covered his eyes, and for some reason, in between greeting each guest he would make the weirdest mouth movement I’d ever seen. He would purse his lips and then quickly pinch them over to each side of his mouth. He did this in one smooth back-and-forth motion, almost as if he had a bad itch he was trying to alleviate by crinkling his nose as vigorously and discreetly as possible.

But this odd feature was much less interesting and bothersome then the obvious conundrum at hand: Was this kid part of the staff? A kid with a job? In a circus? Impossible. Not only was this kid shorter than I was, but he was quite obviously younger too, which of course meant that he was indisputably inferior to me.

And yet while I spent most of my time sitting in miserable, friendless classrooms, he got to proudly invite guests into a circus tent! Apparently he was a celebrity in an authority position who probably got paid money too, which basically made him a grown-up. It wasn’t fair, and I felt personally insulted.

This apparent crime against nature, coupled with my deep shame at having to attend a childish circus in the first place (with my parents and siblings no less), made me very sullen, and as we stepped up to get our tickets, I met the boys timid smile with the sternest, most condescending look I could muster. He cowered instantly, stared at his feet, and did that weird lip thing. At least he knew his place in the pecking order.

I felt a little better.

Inside the tent we found our seats, and the circus performance began. The seating we had procured was such that we could see most of the bleachers that curved around the circus ring, and I marveled that the tent was much larger on the inside than it had appeared from the outside. The show was surprisingly good (for a small circus that is). What it lacked in exotic animals and howling motorcycles it made up for with hilarious clown acts, fantastic magic shows, and dizzying trapeze performances.

The darkness of the tent made the light effects all the more brilliant, and every so often a spotlight would stray from the center to pan over the audience revealing waves of amused faces. Despite being unhappy about my attendance, I appreciated the dark interior. That kid door-greeter couldn’t see me in the dark, and certainly couldn’t tell if I laughed or clapped, and as it turned out, the trapeze artists were so skilled in their acrobatic deceptions that I feared more for their lives then for my precious status in the boy dominance hierarchy.

And so, with thoughts of the despised door-greeter (and his obviously undeserved position) momentarily banished by distraction, I gave myself permission to enjoy the show.

And what a show it was!

Each act was better than the last, and after an action-packed clown act ended in firecrackers and laughter, the lights dimmed in preparation for the next act which was sure to outdo its predecessor. The balmy air hung in anticipation…

Suddenly the darkness was jolted to life by the song Cotton Eye Joe by Rednex blasting out of invisible speakers. A golden spotlight cut through the sawdust to reveal a short cowboy with a wisp of hair covering his eyes, expertly wielding a lasso.

I watched in horror as this kid, sporting an over-sized cowboy hat and chaps, began performing increasingly complex rope tricks to an increasingly enthusiastic audience. With a charisma and stage presence that befit a seasoned actor, he even had the audience clapping along to the heavy techno beat. My nearly forgotten door-greeting nemesis was no ordinary door-greeter: he was a full-fledged circus performer.

The circus had betrayed me. I tried to ignore the performance, but conspicuously looking away put me at risk of standing out to the rest of the audience. I decided to turn my judgment on his pathetic performance instead.

I scrutinized his every movement looking for mistakes. I counted the seconds between each swing of the lasso as it looped across his boots for signs of fatigue. But I could find nothing to criticize.

I rolled my eyes and tried to hide the overwhelming sense of stage fright that should have been his and not mine. I did not join in the crowds punctuated claps. Hell no! I kept my arms folded and from my distant bleacher seat, refused to reward him with even a smile of appreciation.

But then something strange happened: the music stopped, but the boy didn’t.

The cowboy lasso routine was apparently longer than the Cotton Eye Joe track that had been selected as its accompaniment. As the last note of the song faded, so did the energy of the tent. The spell broke, and electricity gave way to sudden and eerie silence.

Time seemed to slow as I turned to look at the audience, rows of glowing profiles, each one a blank mask. Silent. Unmoving. I followed their collective stare to the sandpit in which the boy danced, held in motion by the glare of the spotlight, surrounded by a perpetually rising cloud of dust. Not a sound from the bleachers, not even a rustle in the air… nothing but the mechanical slapping of the rope against the sand.

For his sake I held my breath. I could feel the dead weight of the audience pressing down on him… feel the moment stretch further and further… reaching for the curtain of volume that had been lifted and now refused to fall.

As quickly as it had stopped, Cotton Eye Joe began playing again. Time returned to its normal pace, and the energy returned to the tent, where it eventually climaxed in applause.

Amidst the ovation, I glared at the young cowboy who bowed awkwardly before jogging off-stage, but I couldn’t bring myself to see him as an entitled jerk anymore. Something had changed. I still could not clap for him, but I no longer hated him either.

During what remained of the circus I contemplated this boy. This rope-tricking cowboy with the wisp of hair covering his eyes. I was filled with a sense of remorse and decided (as a feeble act of penance), to give him something truly valuable for his trouble: a smile from a superior, older boy.

Once again, I found myself waiting in line.

But exit lines always move faster than entrance lines, and leave little time for acts of atonement. I resisted the urge to linger, but for my conscience sake, I did indulge in one final look back as I trailed behind my parents towards the parking lot.

There he was, smiling timidly and thanking the guests, and in between each thank-you, the same weird lip thing.

On the ride home, I tried to imitate that weird lip motion, but found that I could only successfully do it to the right side of my mouth. With practice I was able to master both sides, and it would take many more months to break the habit all together.